Angular 8 is Released! What’s New in It? 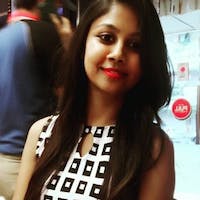 Earlier this year, on 23rd May 2019, AngularJS version 8 has been released in the market. Today, the AngularJS web development framework is arguably one of the most popular open-source options for impressive frontend development.

I am saying these based on the AngularJS usage statistics report globally. Let’s take a look at the report. 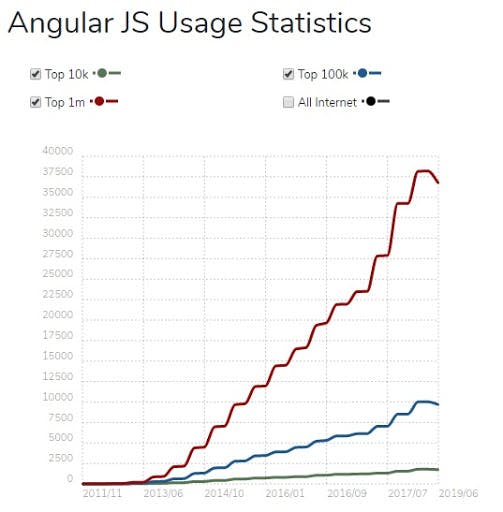 As per the report by BuiltWith, today, worldwide 1,152,159 live websites are using AngularJS. Some of the popular websites that are using the Angular js web development framework are

If you want to look at the top industry verticals where AngularJS is being used, here it is. 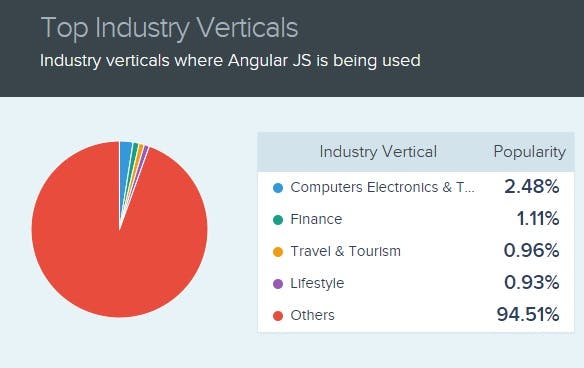 In this blog, I am going to highlight what new features and updates AngularJS version 8 is offering.

This latest version has brought a bunch of performance and workflow improvements. Let’s dig a bit deeper into the Angular 8 feature list.

Now, the browser will automatically load the correct bundle. This is one of the major performance improvements offered by the new Angular 8.0. No need to do anything extra to avail benefits of differential loading. The below-mentioned command will take care of everything.

The CLI workflow is continuously improving. Now, ng run, ng test, and ng build are equipped to be extended by third-party tools and libraries. For instance, the AngularFire with a deploy command is already making use of these new capabilities.

This is based on the Angular Routing concept. It helps to bring down the large file size by lazily loading the required files.

In the earlier versions of AngularJS, the route configuration uses the property @loadChildren. It accepts a string. Previously, if there were any typos while writing the code or a wrong module name, Angular would not consider it as being wrong. And it would have accepted whatever value was there as a string until the AngularJS developers try building it.

To overcome this issue, in this latest version, support for dynamic imports in router configuration has been added.

Use of Builders API

With this newest Angular version, developers and experts can use Builders API. Builders are used for main operations like build, serve, lint, test, and e2e.

Now, a certified AngularJS developer can easily build a CLI application with AngularJS version 8.0. The credit for this amazing functionality goes to Bazel, developed and used by none other than Google! The most interesting thing about Bazel is that this build tool can seamlessly work with almost any language input.

Other than all the above-mentioned features and updates, AngularJS version 8 has some more updates and features to offer. The list will remain incomplete without mentioning

With this Angular 8 version, a preview of Ivy has been made available for testing. It is a new rendering engine to produce smaller bundle sizes. However, you should not start using it in production yet.

What do you think? Comment down below to get the discussion started.

Tags:#web-development#angularjs#2019
Start a personal dev blog on your domain for free and grow your readership.