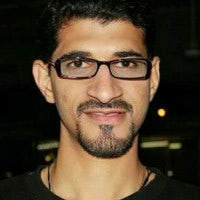 A website or web application may look differently depending on the location from where it is accessed. If you are building a consumer web product that has a diverse target audience, it is essential to perform geolocation testing.

The good news is that Selenium 4 can really take you places to ensure your web-application renders perfectly from different countries, states, or even cities. Today, I am going to help you teleport from one location to another. Well, to be honest it’s going to be your browser doing that. In this article, I will be mocking browser’s geolocation using Selenium 4 alpha. Ready? Let’s do this.

Geolocation testing, as the name suggests, is a type of testing where perform tests on your website from IPs of various countries around the world. In one of our earlier blogs, we have covered the importance of geolocation browser testing in greater depth.
Shown below is the diversity of search results when search for LambdaTest is performed through an IP address from France & UK respectively. 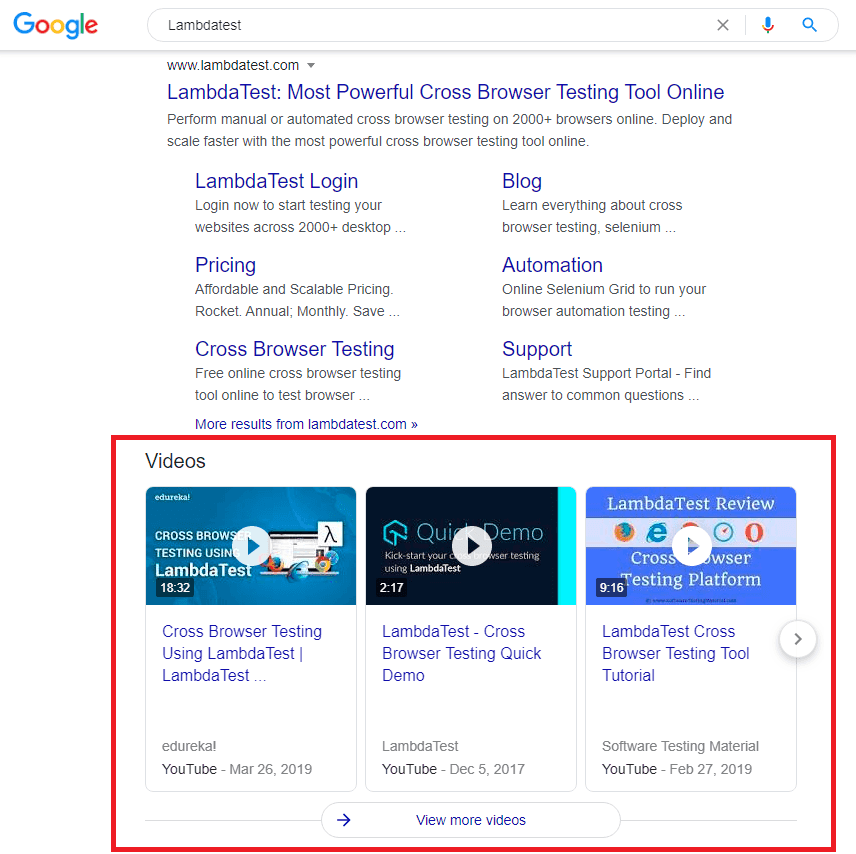 The difference in search results clearly highlights the necessity of Geolocation testing which is a practice where testing of the website is performed from a set of IP addresses that belong to different countries around the world.

Geolocation testing is useful for checking whether product features dependent on geolocation (e.g. content) are localized as per the user location & demographics. Also called geotargeting, it is an important feature for evaluating SERP (Search Engine Result Pages). Better search rankings in turn aids in increasing conversions of the website (or web app).

Here are some of the features that can be tested with Geolocation browser testing:

To further explain the importance of Geolocation Testing with selenium. I’ll take the case of a popular e-commerce store and show you how it serves different content based on the location.

In the wake of COVID-19 pandemic, many popular e-commerce websites temporarily stopped shipping to areas (or pin codes) where a large number of COVID-19 cases were reported.

This is where geolocation testing comes very handy as it helps in testing the tailor-made experience of the website (or app) depending on the user’s location. Here are the sample pages of a popular e-commerce website which shows how the content and UX differs depending on the country from where the page is accessed:

Selenium is a popular test automation framework that provides a number of automated browser testing capabilities. The next major public release will be Selenium 4 but there is no official announcement on the official release of the same. If you are of an inquisitive nature (like me) and enjoy experimenting with the latest features of Selenium, you should download the Selenium 4 (Alpha) version. At the time of writing this blog, the latest Selenium 4 Alpha version was Selenium 4.0.0-alpha-6.

We have already covered features that you can expect from Selenium 4 Alpha , along with usage of relative locators in Selenium 4. For demonstrating geolocation testing with Selenium, we would be using the Python language; further details about Selenium 4 for Python are available here.

Bonus Tip – If you are using Selenium Java and want to try geolocation testing in Selenium, you can directly navigate here☺. Before heading to the implementation, we recommend you to go through this section to get a hold of the test case used for demonstration.

For installing Selenium 4.0.0-alpha-6 in your system, execute the following command on the terminal:

Post the completion, you can further execute the following command to verify whether Selenium 4 installation was successful (or not)

In the latest release of Selenium 4, they have provided access to Chrome DevTools and CDP (Chrome DevTools Protocol). These new set of features can be used for performing geolocation testing with Selenium.

As Chrome DevTools is used, the browser under test should be Google Chrome. We recommend you to download Chrome if you plan to execute the sample code provided further in the blog. You also have to install Selenium WebDriver for Chrome from here.

With installation of Selenium 4 (Alpha), Google Chrome, and Chrome WebDriver; your environment is all set for geolocation testing with Selenium.

For mocking (or faking) the geolocation, you first need to supply the latitude and longitude of the mock location. The same can be obtained using Google Maps where you have to search for the desired location.

For mocking the location to the one mentioned above, we use executeCdpCommand which is available with Selenium 4. DevTools Protocol website has more information about the command name that needs to be passed to executeCdpCommand. 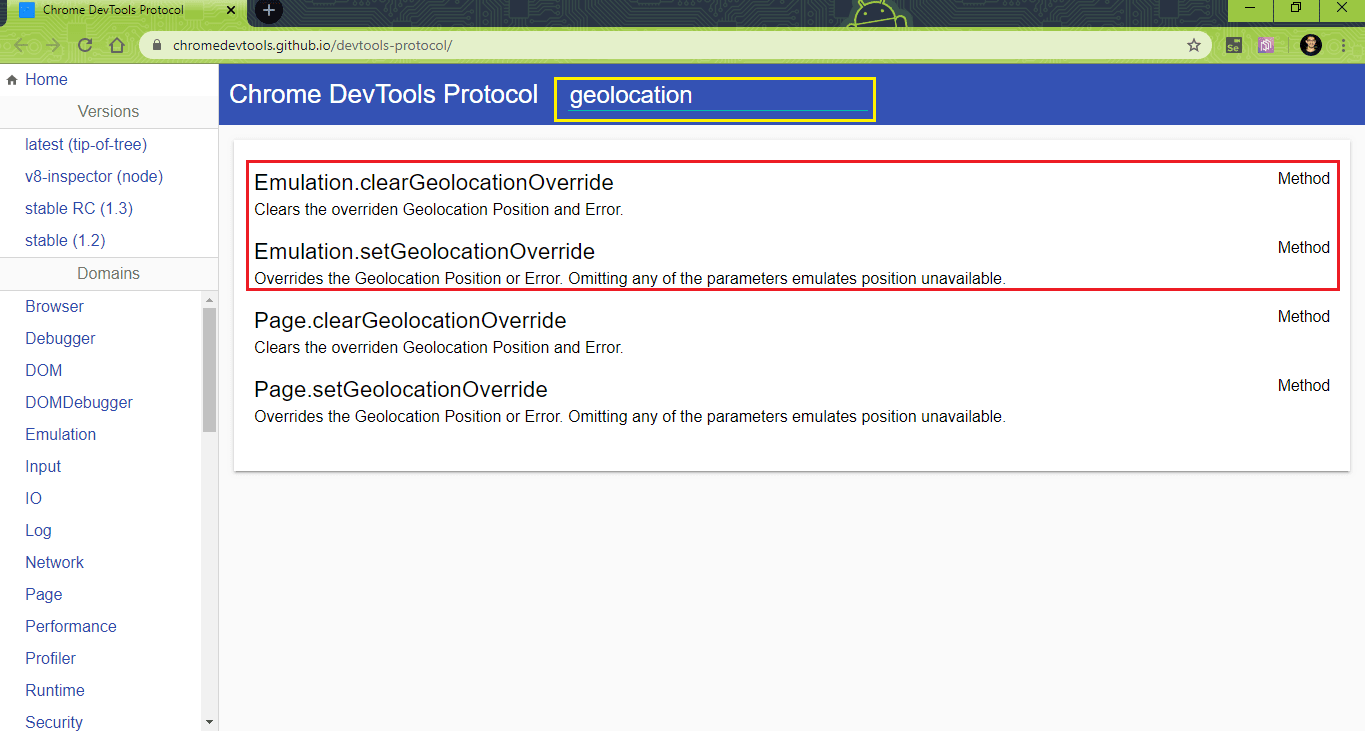 As the current geolocation position needs to be overridden, we use the Emulation.setGeolocationOverride command.

The command takes three parameters – Latitude, Longitude, and Accuracy. Using Google maps, we have already found the coordinates (Latitude: 42.1408845, Longitude: -72.5033907) that have to be used for geolocation testing with Selenium. Any non-zero number should suffice for accuracy. These parameters basically form the map coordinates against which the location will be mocked.

For geolocation testing with Selenium, we search for Denny’s restaurant using the location coordinates that we derived from Google Maps.

Step 1 – To get started, we create a Chrome WebDriver instance as the testing is performed on the Chrome browser. If you want to learn more about testing with ChromeDriver, you can refer to the blog linked.

Step 3 – Now that the mocked geolocation information is available, we trigger the location search for nearby Denny’s restaurants as per the supplied information. Chrome Inspection Tools is used for locating the web element (.icon-geolocate) using CSS Selector property.

Once the element is located, a click is performed for triggering location based search for Denny’s restaurants.

For executing the code for Geolocation testing with Selenium, I’ll use the pytest command with verbosity on.

Shown below in this Selenium tutorial on browser location test is the execution snapshot captured from the terminal.

Here is the search result of nearby Denny’s restaurants as per the latitude and longitude supplied in the implementation for Geolocation testing with Selenium.

Geolocation testing with Selenium can also be performed using the Java Language as support is available for that language as well. Mocking geolocation with Selenium 4 is extremely useful for testing product features that are dependent on the user’s location. 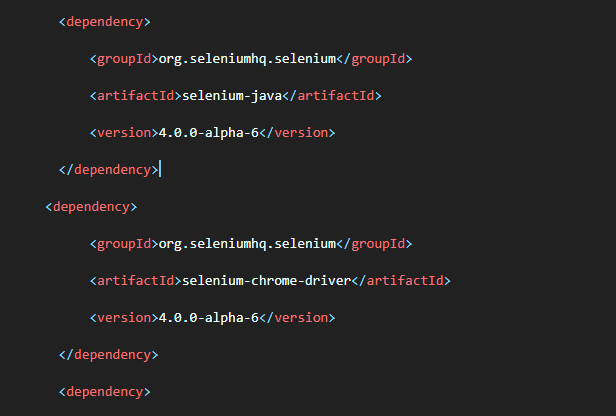 The entries can be directly added in your project’s pom.xml so that you can directly get geolocation with Selenium Java working on your machine. Here is the complete pom.xml:

Step 1 – The testng framework is used for testing. We import the necessary packages of testng.

Step 2 – The method implemented under @BeforeClass annotation sets up the ChromeDriver. For using CDP methods, we have declared the driver as ChromeDriver.

Step 3 – Test method is implemented under @Test annotation. HashMap, a map-based class for storing Key and Value pairs (HashMap) is used for storing the latitude, longitude, and accuracy; the parameters required for Google Maps.

Step 4 – The executeCdpCommand, a new method added in the ChromeDriver class is used for mocking the geolocation. The input arguments to the method are command name (i.e. Emulation.setGeolocationOverride) and map of parameters (i.e. coordinates).

Step 6 – The implementation of the method under @AfterClass annotation frees the resources allocated by the instantiated Chrome WebDriver.

In the Maven project in Eclipse, right-click on the Java File (i.e. GeoLocationTest.java) and Run as ‘TestNG Test’. 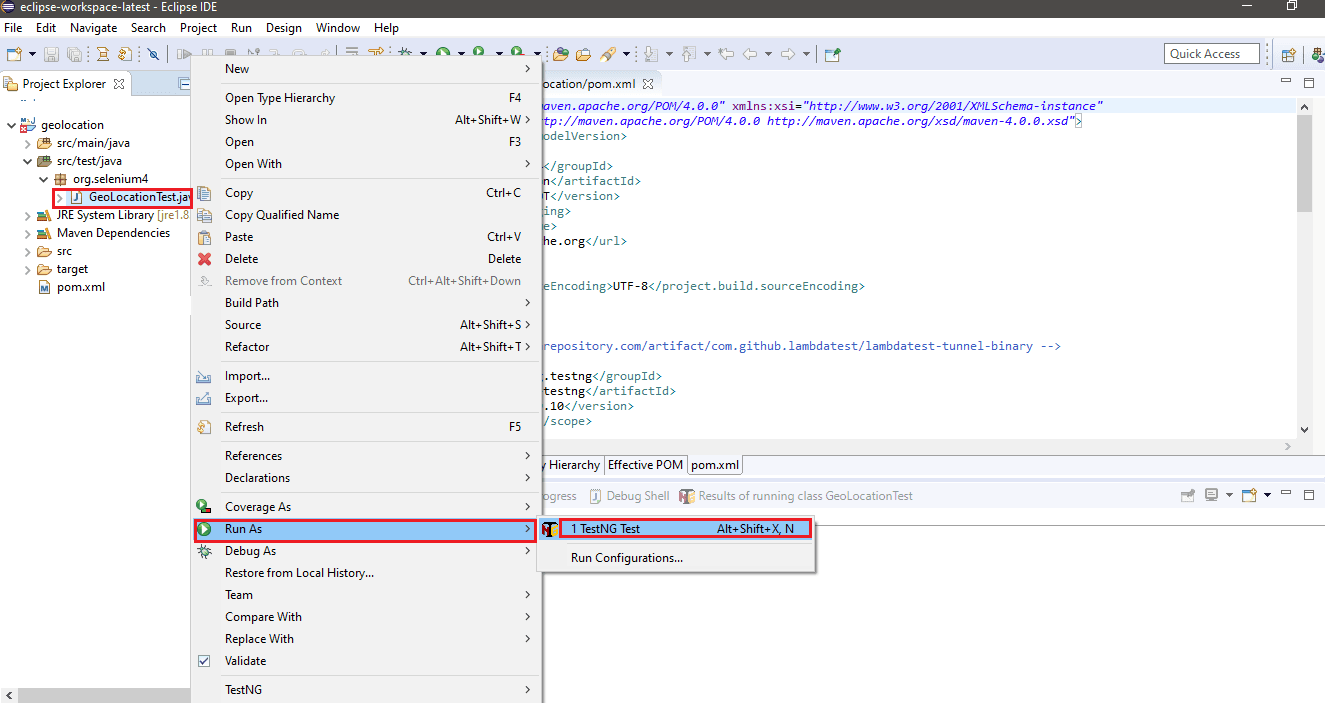 The test would instantiate the Chrome browser and perform the desired test that mocks geolocation. Shown below is the execution output: 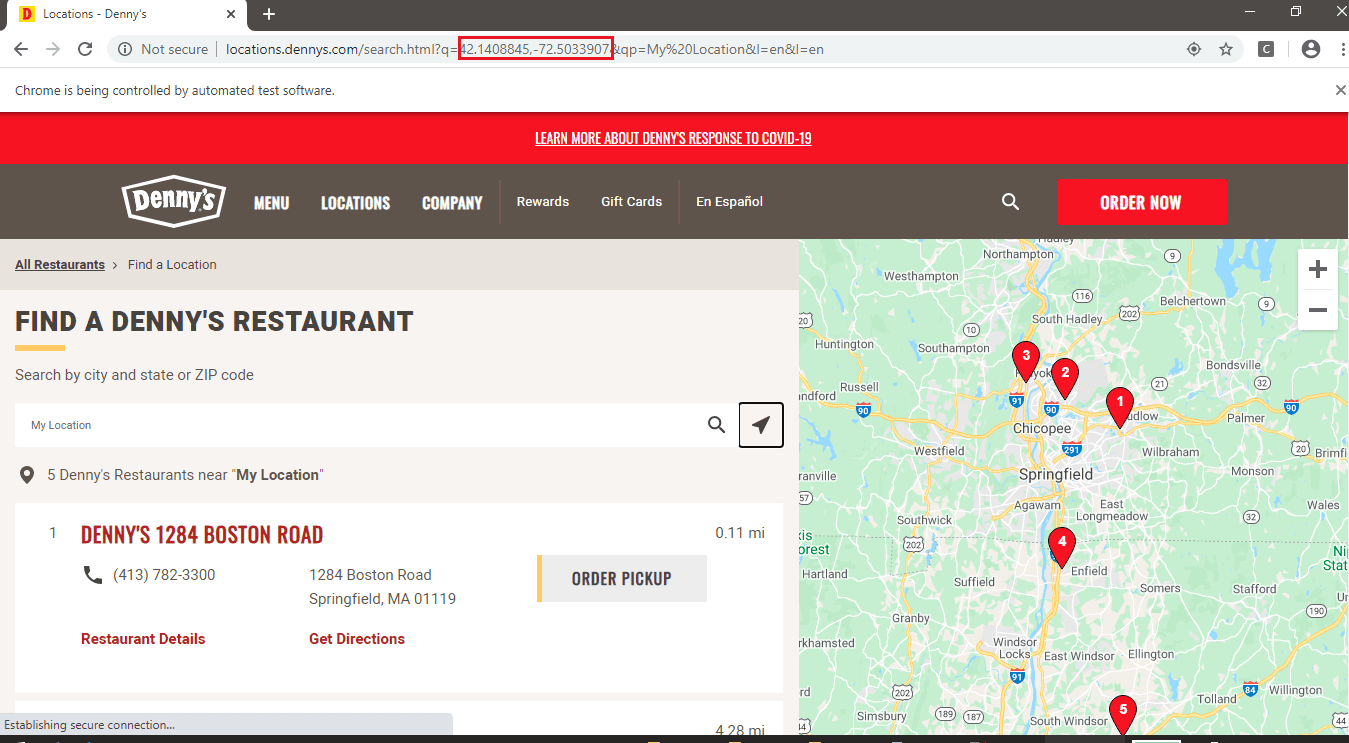 In order to learn more about browser automation with Selenium Java, you can refer to the article linked.

LambdaTest provides cross browser testing on the Selenium Grid Using which you can perform automated browser testing across 2000+ combinations of real browsers and operating systems online.

Shown below is the browser capabilities with geolocation country set to United States.

Using LambdaTest, you can perform geolocation testing of your website (or web app) across 53 different countries. The drop-down for Geolocation is available for Selenium and Selenium 4. 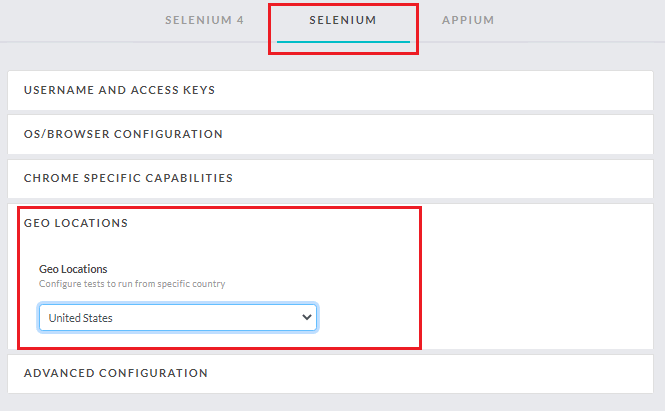 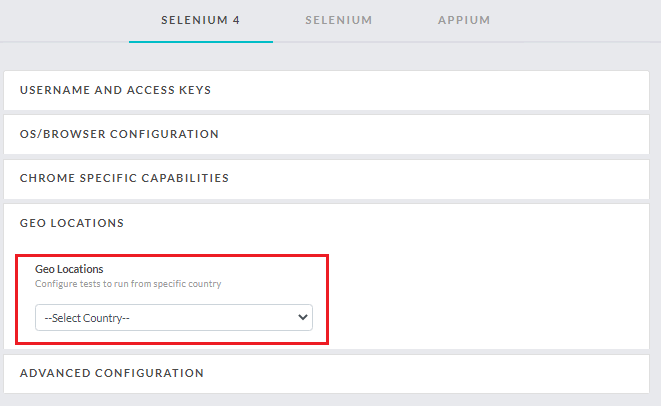 Geolocation testing with Selenium 4 helps in automating the testing of your website against different geolocations i.e. latitude and longitude. Access to Chrome DevTools and CDP (Chrome DevTools Protocol) is provided in Selenium 4 and that is the key enabler for geolocation browser testing using Selenium.

LambdaTest helps you automate geolocation browser testing from 53 countries across the globe. Geolocation testing on the platform can be performed through real-time testing, as well as, automated browser testing using Selenium 4.