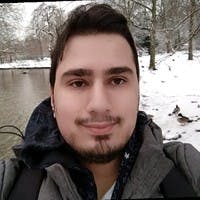 Docker is a tool used to create and run containers, self-sufficient units that can have their own operating system, tools, and libraries, and run your code in an isolated environment. That means you don't have to worry about the libraries and the operating system architecture which can be different than your own development environment. Docker solves one of the most common excuses developers use when the production code fails: "But, it works on my machine". 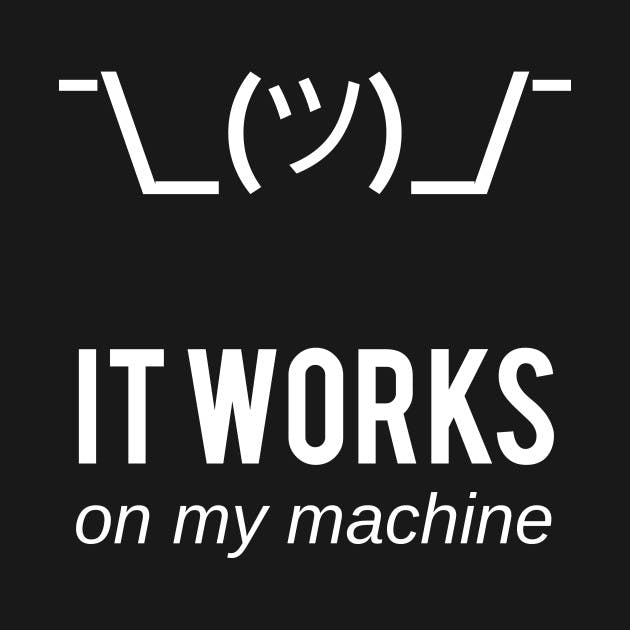 In this Docker tutorial, I'll cover all the basics and will demonstrate how all Docker beginners can containerize Node.js and Go applications. Even if you aren't familiar with these languages it should be easy for you to follow this tutorial and use any other language.

Docker is an engine for creating containers. You can think of it as an operating system that can be mounted inside another operating system, and managed by the Docker engine.

Before we start working with Docker we need to understand 3 concepts:

Container - A standardized unit of software, a container will typically run an operating system, any libraries that we may need, and our application.

Image - An image holds the layers that when mounted on the Docker engine, can operate as a container.

Dockerfile - A Dockerfile is a blueprint for creating a Docker image, it can inherit from another container, define what software to install, what files to transfer from our computer to the image, and what commands to run.

For Linux users, you will probably need to set a user group so you won't have to use sudo every time:

If you installed Docker correctly, you should be able to check the version like so:

We will cover publishing containers to Docker Hub, and for that we will have to register as a user here.

Once registered, we need to set the credentials in our local Docker, and here are three different ways to do so.

Once installed, you should have the docker command available. Open your terminal/cmd and write the following command to check if Docker is installed: docker -v, and the output should look like this: Docker version 18.09.1, build 4c52b90.

Once you have Docker installed, we can start by running our very first image! We can use the "Hello world" image for this. You just need to run:

And you should see a message that starts with "Hello from Docker!". Now, let's analyze what happened here:

Let's build our own container!

For this Docker tutorial, we can choose between using Node.js or Go (just pick one). In reality you should be able to use pretty much any server technology you want (.net, Python, PHP, etc...).

You don't even need to install Go or Node.js to run the examples, since Docker will handle the dependencies for us.

First, let's create a directory for our little project and call it docker-example.

Create a file and call it server.js. In this file simply write this:

Create a file and call it server.go, and in this file simply write this:

When running any of these applications (node server.js, or go run server) you should be able to go to http://localhost:8000/ in the browser and see our message. You should also see a message in the terminal.

The next step in this Docker tutorial is to write our first Dockerfile. The file name should be Dockerfile, with no extensions.

As you can see, a Dockerfile is just a series of commands to the docker engine that tells it what to do:

There are a few more commands for Dockerfiles, but these are the most used ones.

Here are examples for a Dockerfile for Go and Node.js, pick the one you built the server with.

npm install is commented out, since we don't use any npm packages, but this is where you would call it.

Here's what the Dockerfile for our Go application should look like:

Let's build an image and run our container!

You will see an output that looks something like this:

As you can see, Docker will specify the commands that it's running and ends up giving us an image id on the last line: 8675fc90ccdd. Just note it down somewhere since we will use it later.

We can now use this image to run the container:

Now you should be able to check out the browser and see the message from our server.

Pushing the image to Docker Hub

We first need to tag our image to give it a proper name. The name must be in this format <USER-NAME>/<IMAGE-NAME>. Here is an example with my username on Docker Hub (lironavon), and my image name (my-server)

Now let's create an image on Docker Hub. You can click here to do so, and name it the same as we did when tagging. Here is an image: 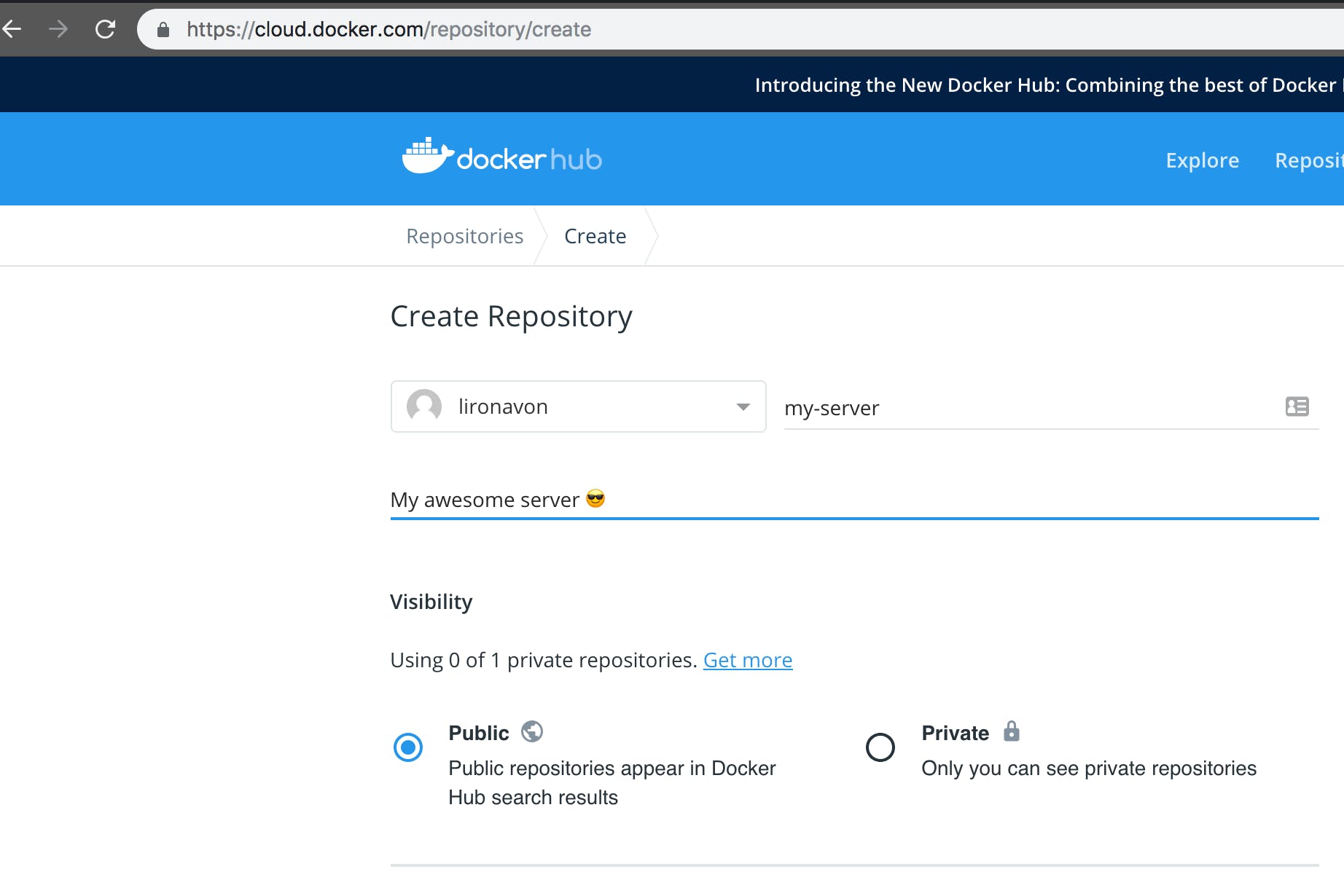 After you name the image, scroll down and click create.

Now we can push it to Docker Hub.

This wouldn't be a comprehensive Docker tutorial unless we take a deeper dive into other basic Docker CLI commands. So, let's check out some of the most useful ones:

Docker 'ps' command is very strong, it has two nice flags that allows it to mix with other commands easily:

Here are some common use cases for them:

Debugging a running application inside a container

One of the hardest things for me when I started to work with containers, was debugging, but after a while, I learned you could actually debug applications inside the container! It might take a while for the initial setup, but it's worth it. I will show how to do it in Node.js since it's the most straight forward, but I will link to a few other tutorials, and you should find one for your language of choice easily.

How to debug Node.js inside Docker container with Chrome

First, create a separate Dockerfile, and copy this:

The --inspect-brk=0.0.0.0 flag tells node to run in debug mode, and the -brk part tells it to stop at the first line, the 0.0.0.0 part tells it to accept connections from any IP, since we are going to access it from the host IP and not from the container localhost.

We can now build the debug image, and then run it like this:

You should see a message like this in the terminal:

Now you can open chrome, go to chrome://inspect and you should see a remote target named server.js. Clicking it will open a chrome debugger for us.

Debug other languages inside Docker

Most debuggers are capable of exposing a web API for debugging. Here is a list of some of the languages and how to debug them. You should be able to find documentation for other languages easily.

Debugging Go inside a container

Debugging Python inside a container

Debugging Elixir inside a container

Docker is a great tool, and it is massive. You should also take a look at other tools like Docker Swarm, Docker Compose or Kubernetes that increase the productivity and the ease of deployment of containers.

In this Docker tutorial for beginners, we went through the process of installing Docker, running our first container and dockerizing our first application. We've also demonstrated how to push your Docker images to Docker Hub. Let me know in the comments below how you liked this tutorial and please share it with whoever might find it useful.

Tags:#docker#programming
Start a personal dev blog on your domain for free and grow your readership.