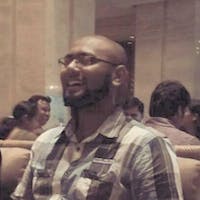 Recently, a colleague and I had to spike on the possibility of migrating our CI/CD infrastructure from a VM based design to a Kubernetes based one. While exploring how to do it, we had to spend some time to find out all the information we needed just to install and configure GoCD without the migration. So I decided to write this and a few other posts hoping someone like me would find it helpful. This is the first part on Installing and Configuring GoCD on GKE using Helm. The second part on Configuring Google Container Registry (GCR) as an Artifact Store in GoCD can be found here. The third part on Configuring Go Agents in GoCD in Kubernetes: Static and Elastic Agents can be found here

You can create the cluster using multiple options. You can use

You can specify the zone, GKE master version, the machine type and number of nodes among other things as per your requirements. Remember to allocate enough vCPUs and RAM to run the GoCD server as well as the agents.

GoCD provides a helm chart to deploy GoCD easily in a cluster. You can also find a basic tutorial here which I’m repeating for better continuity.

This will install Tiller which is the server side component of Helm on your cluster.

3.Next we need to create a cluster role binding with the kube-system service account.

4.Now we add the repository where the GoCD chart is available as follows.

5.Now, all we have to do is just install the chart as

This will install GoCD on your server along with an ingress to allow access to the Go server over the internet.

If you go to the server you’ll be able to see the GoCD dashboard with a hello-world pipeline executed just to verify if everything works.

But executing the above command configures the Go server using the values available in this values.yaml file. If you are just playing around to get a feel of using GoCD in Kubernetes, this is fine. However if you are trying to configure the Go server with some basic options, then it’s better to use your own values.yaml file as follows

Then you can go to the server.persistence.extraVolumes section and add the secret as

This will create a volume (go-password-volume-name) from the given secret name (go-password). Now you can mount the volume to any location you want in the server.persistence.extraVolumeMounts section as follows

This will mount the volume to the /etc/go location. You can now install the GoCD helm chart using the above modified values in the values.yaml.

An important point to note is that this will only mount the password file in the given location. It will NOT enable password based authentication directly. To enable this, you need to add a new Authorization Configuration. This can be configured using either the UI or using a POST request.

1.To use the UI to configure this, you can refer here . Make sure to provide the Password file path correctly. In our case it will be /etc/go/go-password.

2.To use a POST request, you can use this cURL command

You can change the $gocd_public_ip with your GoCD dashboard public IP. You can get this IP from the GoCD Public IP Address section above.

Since we had all of our code hosted in GitHub, we also needed the Go server to have access to our GitHub repositories. One of the most used ways to give access to GitHub is SSH. The values.yaml file allows us to specify a secret that will contain the necessary SSH key files. For more information on generating SSH keys, you can refer here . For GoCD, the three files i.e id_rsa, id_rsa.pub and known_hosts have to be copied to the /etc/go/.ssh folder. This is because GoCD operates with a username called go.

This creates a secret gocd-server-ssh in the cluster’s gocd namespace. We can then specify this secret in the server.security.ssh section as follows

Just because the Go Server has access doesn’t mean that it’s corresponding Go agents will also have access. Access for agents has to be configured separately. This is similar to configuring for the server. You can specify the secret name in the agent.security.ssh section as follows

So there you go. I hope you find it useful. If you have any questions, please feel free to comment and I’ll answer from whatever I’ve learnt so far.

#kubernetes#gcp#gocd#gke#cicd-cjy1vtdk2005kjjs17n8couc3
Start a personal dev blog on your domain for free and grow your readership.