Interacting with Neo4j from Pharo Smalltalk 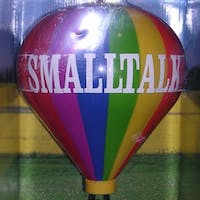 There are various ways to persist data with Pharo Smalltalk, but you may not be aware that Graph DB is also one of the leading candidates.

Smalltalk is an environment where objects are live on memory, so as application development progresses, graphs of objects with rich structures will be created in the image. When you try to save these objects in RDB, the impedance mismatch problem between the tables and the objects will arise. Even with the power of OR-mappers such as Glorp, it is very difficult to maintain the complex mappings.

On the other hand, graph database allows you to persist the graph structure created by objects without awkward conversions. You don't have to worry about complicated mappings.

To install SCypherGraph, evaluate the following code in Pharo's Playground[^1].

[^1]: Note that Playground opens with Control + o + w on Windows. On Mac, you can use Command key instead)

This will download the prerequisites libraries and SCypherGraph itself from GitHub and install them on Pharo.

From the Neo4j Download Center, select "Community Server" to retrieve and extract the archive file.

After setting the path to the bin directory, execute neo4j console (neo4j.bat console in the case of windows). Neo4j is written in Java, so JDK 11 or later is required for execution.

Accessing http://localhost:7474/ with a browser will bring up a web-based administration page. You will need to set an administrator password for the first time. (I am assuming version 4.2.3. The UI may change slightly when you upgrade) 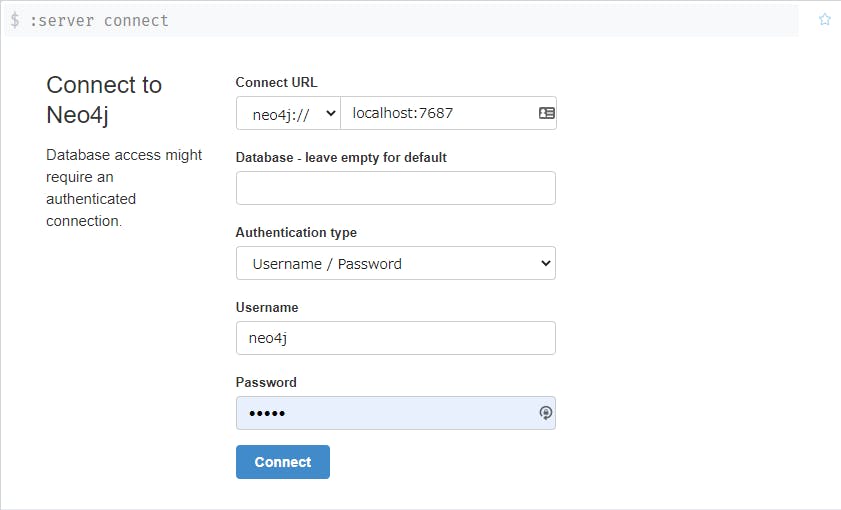 By default, you can login with:

However, if you press the "Connect" button, you will be prompted to change the login password immediately.

This time, let's change it as follows: 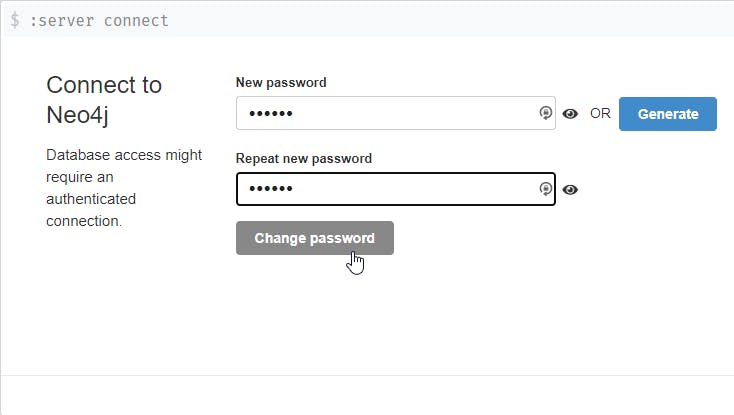 After changing the password, the command pane will be displayed on the top. Let's populate the sample data called "Movie Graph" as a starting point.

First, enter :use neo4j command after the $ prompt. You can evaluate it by pressing the play icon button (or Control + enter).

This is to switch the default database from system to neo4j. You should change the default DB because sample data cannot be entered into the system database.

Then open the tutorial. In the command pane, execute as follows:

A multi-page tutorial will appear directly below. If you go to the second page and click the play button in the upper left corner, the code of Cypher (Neo4j graph query/operation language) will be pasted in the top command pane. 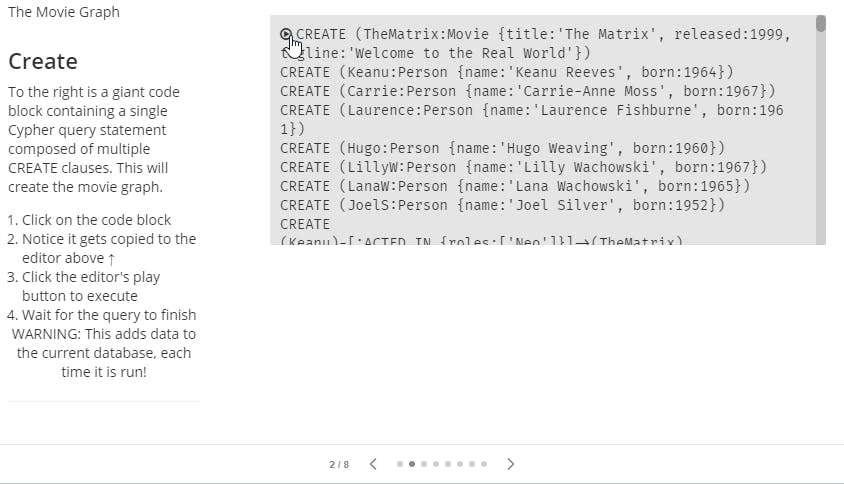 Let's run the pasted Cypher for populating the data.

Now, let's connect to Neo4j with SCypherGraph and extract the data of "Movie Graph". Write the following code[^2] in Pharo's Playground and "print it". (Select the whole code and Control + p)

SgGraphDb >> allLabels retrieves the label list of the nodes inside the DB. At the moment, there are only 'Movie' and 'Person' labels.

I would like to display all nodes labeled as 'Movie'. Open Transcript with Control + o + t, then append the following code to Playground and "Do it". (Choose th code and Control + d)

By SgGraphDb >> nodesLabeled:, you can retrieve a group of nodes with a specific label with. You can see that each Movie node has various information as properties, such as release year and tagline. (Since the results are iterated with do:, they are displayed in Transcript with line breaks for each node by traceCr:) 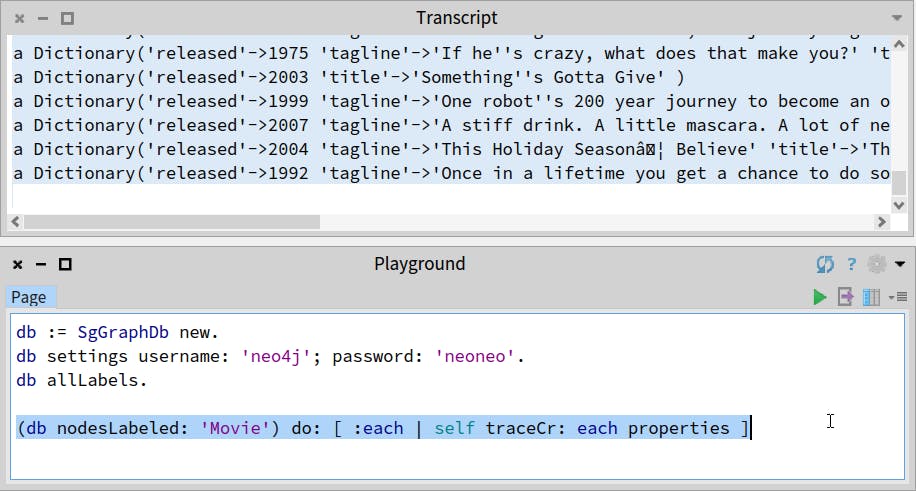 There are too many Movie nodes, so let's specify a condition with where:. Add the following and try "Inspect it". (Control + i)

By using the where: block, the nodes will be filtered to have a 'title' equal to 'The Matrix'. The result is returned as an OrderedCollection, but since it contains only one node, we can just take the first one.

The message properties returns the node's properties list, and Inspector displays them.

Let's take a look at the relationships that are directed towards 'The Matrix'.

You can see that there are different types of relationships such as ACTED_IN, DIRECTED, and PRODUCED. It seems that people such as actors, directors, and producers are involved.

On the other hand, there were no relationships outgoing from 'The Matrix'.

Now, let's specify a few more conditions and list the names of the people who are involved as actors (ACTED_IN) .

The end side of the relationship is Person node and has the property 'name'. By sending collect: message, the result was obtained as an array of strings.

Let's add where: to filter the result further. The first block argument is the start node. The second one is the relationships between the nodes. The last one is the end node. These can be used to specify the conditions for searching.

The ACTED_IN relationship has a property 'roles'. In a certain movie, there are times when one person has more than two roles, so it's reasonably an array. Let's find the person who played 'Neo'.

Looking at the inspector:

Now that we have nicely retrieved nodes and relationships, let's try updating database next.

As shown above, you can create a node with SgGraphDb >> mergeNodeLabeled: properties:. The resulting node will be returned immediately.

You would already have two node inspectors open. You can evaluate Smalltalk expressions in the pane at the bottom of the inspector, so type self properties and try "print it". The property values of the node will be displayed.

Next, I would like to connect a genre node and a movie node with a relationship.

The Matrix looks like a science fiction and action movie, so it should be connected to the two genre nodes.

I also added a property called 'score' as a measure of how strong the tendency of the genres to be classified is.

Relations can also be created with SgNode >> relateTo:typed:properties:, but this will create a new relation each time it is executed again. There is no point in having duplicate associations from the Matrix to the same SF node, so relateOneTo: is suitable this time. As with the merge operation of the node, if there is already the same kind of relationship, it will be returned.

For confirmation, let's extract the nodes properties from the generated relationship.

As you expect, 'The Matrix' is related to 'SF'.

Let's list the relationships outgoing from Matrix. They were empty earlier.

Now you can confirm the two relationships.

Behind the scenes of SCypherGraph, the graph manipulation language Cypher is dynamically generated and sent to Neo4j. The nice thing about SCypherGraph is that you can read and update graph data by simply sending messages to objects without knowing Cypher.

However, in reality, there are some situations where you want to be aware of Cypher from the perspective of performance tuning. Even if you end up writing a slightly long and complicated Cypher, getting only the elements you need at one time will reduce the number of queries executed, which will be advantageous in terms of performance.

Let's try it with a simple Cypher first.

UNWIND generates a list of numbers from range, and the squared results are returned as RETURN.

This will open a SbCypherResult inspector. You can see the actual values by writing self fieldValues in the bottom pane and "print it".

SCypherGraph also supports executing Cypher with parameters. The parts named $from and $to in the following query are the parameters. The argument values are given by arguments:. 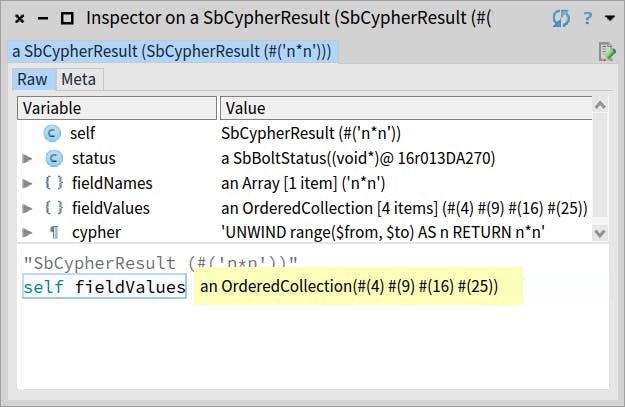 What if you need a more complex Cypher? SCypherGraph internally uses a library called SCypher, which can generate flexible Cypher queries dynamically by sending fluent messages.

Let's consider a slightly more complicated query example. Suppose we would like to get a list of actors, who co-starred with an actor whose name begins with 'Tom', in movies released in 2000.

MATCH specifies the pattern of connections between nodes and relationships. WHERE adds a detailed condition that a name property value starts with 'Tom'. With RETURN, only the necessary information such as the actor's name and movie title is extracted.

If the search pattern is fixed, it would be enough to embed this Cypher in the source code. However, as the number of search variations increases, such a hard-coded approach becomes difficult to implement.

Now, let's create the above Cypher dynamically with SCypher.

It's longer than the Cypher I wrote manually, but you can see that pathPattern, where and return are now variables. So the query is much easier to rearrange.

In addition, although these are Smalltalk-style message sends, the objects in the messages are almost a one-to-one match with Cypher elements. Therefore, they are easy to remember and can be converted smoothly.

If you select whole above code and "print it", you can see that the following Cypher is created.

The query includes parameters, but it's almost the same as the hand-written Cypher shown earlier.

For ease of viewing in Inspector, we use groupedBy: to group by actor's name. The result is that 'Tom Cruise' co-starred with 8 people on 'Jerry Maguire' and 'Tom Hanks' co-starred with 1 person on 'Cast Away'.

Probably not a big deal. Let's change the condition of where a little.

Now that you have changed where condition, you need to regenerate the query. Select both query := ... and result := ... and "inspect it".

With this, we are able to obtain people who co-starred with each other under the age of 30, back in 2000.

What Kind of Application is using SCypherGraph?

Although it has not been put into actual battle fields yet, Allstocker.com, an used construction equipment trading service, keep using Neo4reSt for years. Actually, Neo4reSt is a kind of ancestor of SCypherGraph. The client library is used for realizing advanced searches in Allstocker. Neo4reSt is calling Neo4j's legacy REST API. SCypherGraph, on the other hand, uses Neo4j's native Bolt binary protocol. In my benchmark, SCypherGraph is about three times faster than Neo4Rest. Therefore, Allstocker is considering moving to SCypherGraph in a near future.

SCypherGraph allows you to access Neo4j and manipulate the graph data in a very intuitive way. For more complex use cases, dynamically generated Cyphers can be sent directly to Neo4j, allowing for a high degree of search flexibility.

#smalltalk#graph-database
Start a personal dev blog on your domain for free and grow your readership.