Autocorrect, autocomplete, "Did You mean?" and how to write your own one. 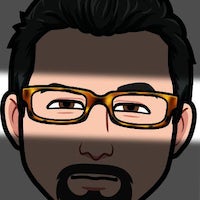 In this text I will explain what is spell correction in the area of search functionality, how it works in Google, Amazon and Pinterest and will demonstrate how to make your own implementation from the ground up using custom search engine Manticore Search.

and so on is a software functionality that suggests you alternatives to or makes automatic corrections of text you have typed in.

The concept of correcting typed text dates back to the 1960s, says Brad Myers, a professor of interface design at Carnegie Mellon University. This’s when a computer scientist named Warren Teitelman who also invented the “undo” command came up with a philosophy of computing called D.W.I.M., or “Do What I Mean.” Rather than programming computers to accept only perfectly formatted instructions, Teitelman said we should program them to recognize obvious mistakes.

Nowadays people can’t imagine their real life without messaging, searching, browsing and using different business programs: text editors, content management systems (CMS), customer relationship management systems (CRM) and others. And in all of them people do typing mistakes, forget proper spelling of words, sometimes are wrong with grammar and so on. This is absolutely fine, everybody makes mistakes. What a good software does is it helps you fix those mistakes the easiest and most efficient way. There are many approaches how it can do that: both from how it looks for a user and what value it brings and how it’s made under the hood. In this article we will focus specifically on search systems as for them it’s especially important to correct your search query before (or while) it’s processed since otherwise your search results may be absolutely wrong.

In terms of user experience we can split the approaches into 2 groups:

In most cases these approaches are combined so a system tries to correct you as you type and if it thinks there’s still some issue - suggests you a correction after you get the search results.

As you type components:

Let me demonstrate you with pictures how different popular sites use the aforementioned techniques.

Google as the site #1 in the Internet does everything: autocorrect, autocomplete, suggestions, mistake highlighting and “did you mean”. Google uses a prediction service to help complete searches and even URLs typed in the address bar: These suggestions or predictions (as Google names that) are based on related web searches, your browsing history, and Google’s websites ranking.

Amazon uses eCommerce oriented search algorithm called A9. What differs it from Google’s algorithm is that it puts a strong emphasis on sales conversions. In terms of Amazon’s autocorrect implementation it consists of all the previously mentioned components, but since it’s a marketplace its suggestions ranking formula seems to include the factor of how attractive a suggestion can be to you in terms of sales.

Pinterest also, like Gogle and Amazon which got ther product dependant algorythms, has its own algorythm which based on internal Domain/Pins/ Pinners Quality and Relevance. But talking about domain quality here is raser means authority then some ranking like Google has). Other words, Pinterest define relevancy as what user do with pins and Pinners profiles.

Let’s now think and speak about how spell correction can be done. There are few ways, but the important thing is that there is no purely programmatic way which will convert your mistyped “ipone” into “iphone” (at least with decent quality). Mostly there has to be a dataset the system is based on. The dataset can be:

But if I change it to “dark ber” it understands I mean beer: 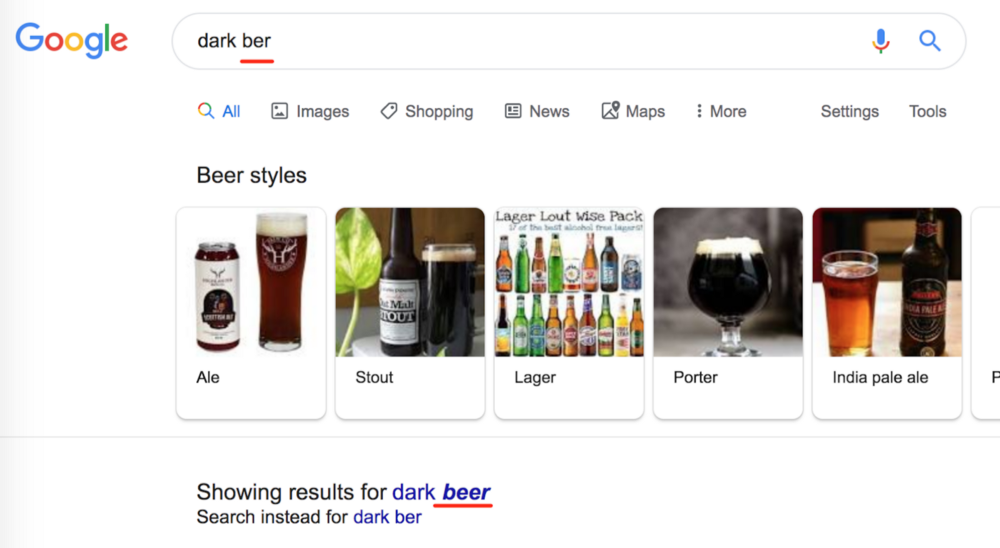 The context may be not just a neighbour word in your query, but your location, date of time, current sentence’s grammar (to let’s say change “there” to “their” or not), your search history and virtually any other things that can affect your intent.

For all the approaches can be used different algorithms of searching and evaluation of candidate spell corrections:

Looking at how fast AI, machine learning and semantic search have been evolving lately I believe in this decade the landscape of spell correction techniques may change dramatically, but for now the above approaches seem to be most used. And most solutions are based on your existing data collection and the dictionary made up from it.

How to write your custom autocorrect

Let’s now speak about what tools you can use to add the autocorrect functionality to your system and at the same time go a little bit deeper into understanding how at least simpler techniques work.

To do that we will take one of popular custom search engines as they often provide the functionality we’re looking for. I like Manticore Search as in contrast to more known Elasticsearch, it is much more lightweight, easier to deal with as it's SQL-native and works faster in most cases. It’s so SQL native that you can even connect to it with a standard MySQL client. They provide an official docker image, so I’ll use that to demonstrate how autocorrect works in Manticore Search:

And inside the container I’ll run mysql to connect to the Manticore Search server running there:

It ships with 2 test tables that we can use for a quick play with spell correction:

Let’s check the schema of testrt and insert few documents into it. Let it be movie titles:

and insert few documents into it. Let it be movie titles:

We can now see all our documents in the index:

What has just happened: when we inserted the titles not just Manticore Search saved them as is, but it made a lot of things essential for natural language processing (NLP): tokenization (to split the titles into words), normalization (to lowercase everything) and many other things, but there was one important for us which is that it has split the words into trigrams they consist from. For example “Combat!” (or actually “combat” after normalization) was split into “com”, “omb”, “mba”, “bat”. So why is that important?

To answer that let’s assume we make a mistype in “combat” and type “comabt” instead. If we now want “combat” to be found how would we do that? The options are: We could go through our whole dictionary and compare each word with our keyword (“comabt”), then we would evaluate the difference between the 2 words. It’s called the Levenshtein distance. There are few ways to calculate it for a given pair of words, but the problem is that even if you can do that fast for 2 words it may take you a while to compare each word from your dictionary with the given word So it would be good to compare not all dictionary words, but only those that have higher chance to be a correction for the given word. And here comes the idea of trigrams - if we split all the dictionary words into trigrams and the search keywords too we can now operate those smaller tokens to find the candidates.

So in this case what’s done internally is that Manticore Search first splits “comabt” into infixes: “com”, “oma”, “mab” and “abt” and then finds the corresponding words in the dictionary as when the document was inserted it also did the same. Since the complexity of this algorithm is not very high (much lower than comparing each word with each other) Manticore quickly finds that there’s a word “combat” which also has “com” and it’s the only candidate word. So all it has to do after that is to make sure the candidate word doesn’t differ very much from the given word. It calculates the Levensthein distance, figures it’s not greater than the limit (4 by default) and returns the candidate:

In other cases there may be more candidates. For example if you search for “combat” there is one word in the dictionary which exactly matches your query (the Levenshtein distance is 0), but there’s another which you might mean and CALL SUGGEST returns it too:

If you enter 2 words CALL QSUGGEST only process your last one:

“So how do I use this functionality in my application?” you may ask. It’s quite simple. Just: keep sending the search query to CALL QSUGGEST after each new character and show it’s output to the user

Here’s the log of what it would give in the case of our dataset:

Tags:#elasticsearch#tutorial#search#search-engine
Start a personal dev blog on your domain for free and grow your readership.